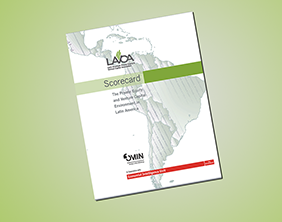 Following a year of buoyant capital markets growth, Brazil improved its score by ten points. This reflects the full impact of legislative and regulatory efforts over the last five years on a range of fronts, including 2003 legislation that spurred rapid expansion of PE funds – Fundos de Investimento em Partipacoes (FIPs). And while Brazil trails top-ranked Chile again this year, the country attracted US$2.2bn – or half of the regional total – in 2007, according to data from Venture Equity Latin America. Mexico’s ranking remains unchanged even after its overall score dropped by two points. Implemented in 2006, the new domestic Fideicomiso de Inversión de Capital Privado (FICAP) fund structure has had limited impact and most funds active in Mexico continue to be based offshore. As the outlook for PE/VC improves in the region, all other LAC countries witnessed a score improvement. Nine major findings emerge from the Scorecard:

First, the friendliness of the business environment to venture capital and private equity (PE/VC) investment continues to vary sharply across the LAC region. At one end of the spectrum, Chile ranks 78 on a scale of 1-100 (with 100 being the most investment friendly), surpassing the next four most highly rated countries-Brazil at 75, Trinidad and Tobago at 65, Mexico at 58 and Uruguay at 56. Of the thirteen countries evaluated, ten score a 50 or above. The regional median moved up to 53 from 49, reflecting a combination of overall improvements and the inclusion of entrepreneurship as a new indicator. Ten of the twelve countries included in last year’s study registered gains, with only Mexico (who’s score declined), and Uruguay (with an unchanged score) deviating from that trend.

Second, the Scorecard usefully benchmarks the LAC countries by comparing them with four countries outside the region. These “comparator” countries-such as the UK-are known for their more robust PE/VC industries, but some have also only relatively recently emerged as developed countries – Israel, Spain and Taiwan. All of the LAC countries, even Chile (78), lag behind the highly favorable PE/VC business climate of the UK (90) and Israel (82). Chile now ranks ahead of Spain (74), while Chile, Brazil and Trinidad and Tobago rank ahead of Taiwan (63).

Third, countries’ business environment rankings are associated in rough but important ways with the levels of investment that they receive (based on the most recent full-year data available), even when controlling for the size of the economy. In short, the more favorable the business environment of a country, the more robust investment tends to be, as measured by annual venture capital and private equity investment as a percentage of GDP. This relationship is especially evident when looking at both the LAC countries and the four benchmark countries from outside the region.

Fourth, other factors apart from the business environment – particularly country size – play a decisive role in determining the market for private capital investment in each country. The larger economies of Argentina, Brazil and Mexico attract the vast majority of PE/VC investment in the LAC region. Argentina, which achieves a low score of 50, captures nearly the same amount of investment as a percentage of GDP as the highest rated Chile.

Fifth, the PE/VC business environment relates to, but is still distinct from, the larger macroeconomic and political risk environment. For example, two countries whose current administrations are pursuing economic policies that have drawn international criticism by straying from economic orthodoxy, Argentina and Ecuador, witnessed improvements in their PE/VC business environments that may surprise some observers. However, there is reason to question the long-term sustainability of these polices.

Sixth, the 2008 Scorecard highlights the growth potential of the PE/VC sector in the region. Many nations have shown momentum toward industry-specific legislation this year, and political leaders are increasingly aware of the macroeconomic benefits of a vibrant PE/VC industry. As global investors return to the region, fundraising has more than tripled in three years, moving from US$1.3 bn in 2005 to US$4.4 bn in 2007. Investment levels have risen to US$7.5 bn, an increase of almost 60% from 2006, and seven times the US$1 bn investment total of 2005. For 2008, scores demonstrate progress in the development and promotion of the PE/VC sector in many countries, but reveal that the region as a whole is being held back by the broader problems of weak judicial systems and international perceptions of corruption.

Seventh, as suggested by the broad-based improvements noted above, countries can make improvements to their PE/VC environment through changes in industry-specific laws and regulations, as well as improvements in the more general macroeconomic and business environment. Brazil, the leading center for PE/VC activity in the region, has strengthened laws on fund formation and operation, and on intellectual property rights protection. It also lowered restrictions on institutional investors, and new segments created by the BOVESPA in 2001 have created new opportunities for exits on public markets. Meanwhile, sixth-place Colombia (tied with Costa Rica), with its still modest but expanding PE/VC market, lowered restrictions on institutional investors and improved its capital markets and judicial system.

Among other countries experiencing the most significant gains in business environment scores, first-ranked Chile made gains in minority shareholder rights, while eighth-ranked Ecuador experienced improvements in tax treatment of PE/VC funds, institutional investor freedom, the judicial system, and perceptions of corruption. Meanwhile, ninth-ranked El Salvador increased its score thanks to improvements in the areas of intellectual property rights protection, capital markets development, the judicial system, and perceptions of corruption. For its part, eleventh-ranked Peru made significant gains thanks to better intellectual property rights protection, more freedom for institutional investors, improved corporate governance, and judicial reforms.

Eighth, there remains considerable scope to lower barriers to institutional investors in PE/VC activities, though four of the LAC countries in the scorecard showed improvements in that area: Brazil, Colombia, Ecuador and Peru. The regional median score was a “2” out of “4”. Eight of the thirteen countries had scores of “1” or “2”. Pension funds and insurance companies remain as largely untapped investment sources because of regulatory restrictions in many countries.

Ninth, the addition of a new variable – entrepreneurship – had considerable impact on country scores. The inclusion of the new indicator raised the score of Argentina, Brazil, Chile, Costa Rica, Ecuador, and Trinidad and Tobago, which all registered marks of “3” or “4” out of a possible “4”. Meanwhile, weak entrepreneurial scores of “1” or “2” lowered the overall scores of Colombia, the Dominican Republic, El Salvador, Mexico, Panama, Peru, and Uruguay.

The addition of the entrepreneurship variable was based on the feedback of fund managers and service providers interviewed in previous years, conversations between EIU and LAVCA, as well as the availability of reliable, comparable data on countries in the region. The entrepreneurship score for each country was based on both quantitative and qualitative factors. The Economist Intelligence Unit compared the World Bank’s Entrepreneurship Database metric – the ratio of new firms to existing firms in the small and medium-sized business segments – with the Global Entrepreneurship Monitor’s 2006 summary results (for ten of the countries in this study). For countries not included in the World Bank’s Entrepreneurship Database (Dominican Republic, Panama, Trinidad and Tobago, and Uruguay), we consulted the World Bank’s cost of starting a business index, which evaluates the procedures, time and costs associated with starting a private business as a percentage of per capita income.

The Economist Intelligence Unit finds that the strength of the entrepreneurial sector in small and medium-sized enterprises, in particular start-ups, is a crucial factor shaping national PE/VC business environments. The inclusion of entrepreneurship in the latest Scorecard strengthens its utility for intra-regional and extra-regional comparisons. The full list of scoring criteria is:

This site uses Akismet to reduce spam. Learn how your comment data is processed.