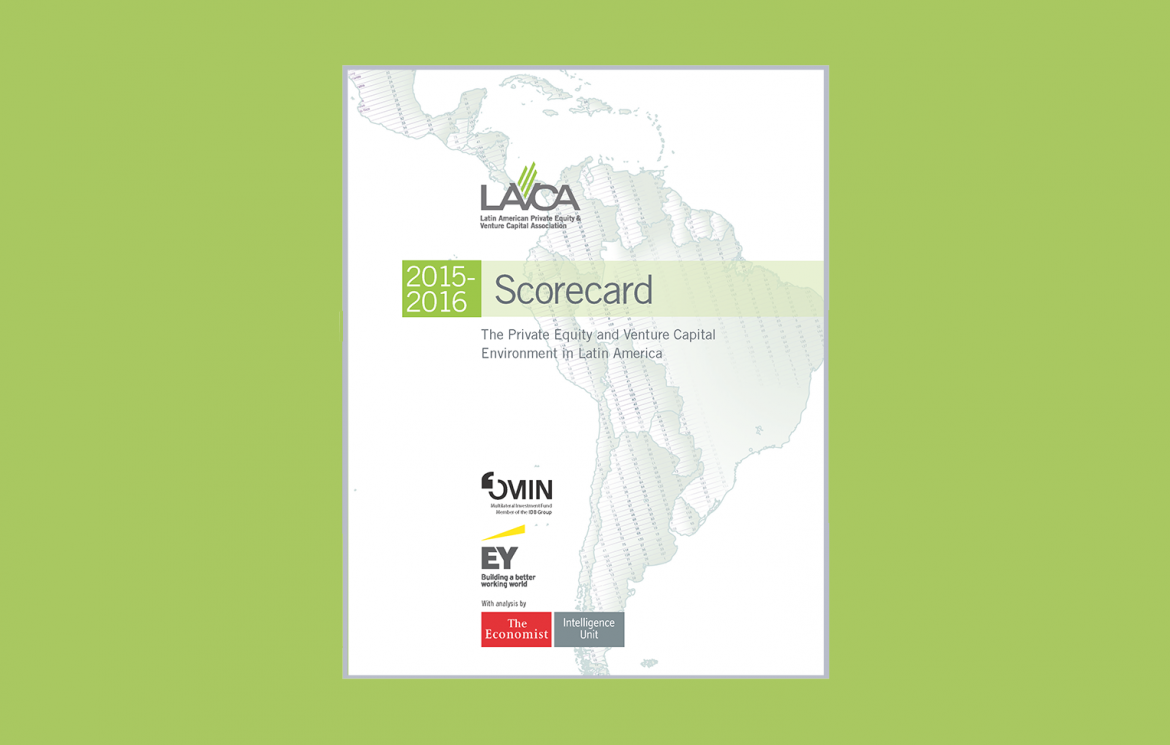 LAVCA first published the Annual Scorecard on the PE/VC Environment in Latin America in 2006, establishing an important benchmark on the region’s markets for investors, fund managers and policymakers.

Produced in collaboration with the Economist Intelligence Unit and with the support of the MIF/IADB and EY, the Scorecard ranks countries based on indicators including taxation, minority shareholder rights, restrictions on institutional investors and capital markets development.

The 2015/2016 LAVCA Scorecard is the first fully updated publication in the new bi-annual edition, with analysis and scores reflecting regulatory, policy, and market updates through mid-year 2015. The bi-annual frequency was adopted as a more accurate reflection of the pace of change in PE/VC industry regulation.

As PE/VC investing gains momentum in Latin America, with the emergence of new firms and record fundraising in 2014, policy makers in the region’s major economies have increased their focus on industry specific regulation. As a result, PE/VC is looked at as distinct from other asset classes, and regulators have delved into more detailed and complex issues, often with the intention of protecting local institutional investors from downside risk. In some markets, this dynamic contributed to downgrades on key indicators in the 2015/2016 Scorecard. Broader tax reforms also had a negative impact on the indicator related to tax treatment of PE/VC for certain countries.

The overall effect was one of increased complexity for firms investing or raising capital in several Latin American nations, as reflected in the country-level overviews and detailed Scorenotes. At the same time, it is worth noting that many policy makers and regulators have engaged in productive dialogue with industry participants and have expressed willingness to continue revising and refining rules going forward.

As in past editions of the Scorecard, Chile ranks first, with a 2015/2016 score of 74, followed by Brazil (72), Mexico (65) and Colombia (60). Chile experienced a downgrade on tax treatment of PE/VC as a result of a tax reform passed in September 2014 which raised corporate taxes and closed some exemptions. In general, policies under the administration elected last year are reflective of an environment that is perceived to be less favorable to business and investors.

The Scorecard benchmarks Latin American and Caribbean countries by comparing them with three markets outside the region – UK, Israel, and Spain.

The 2015/2016 Scorecard was produced by LAVCA and the EIU with support from the Multilateral Investment Fund and EY. It ranks 14 countries based on the following indicators: