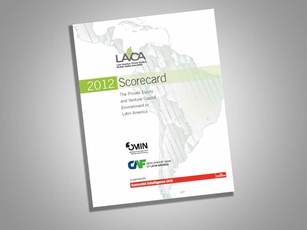 The 2012 LAVCA Scorecard on the Private Equity and Venture Capital Environment in Latin America shows a stable regulatory environment across the region. While there were a number of score changes, there were no dramatic shifts within the regional rankings. In several major economies there are ongoing efforts to modify existing regulation that will affect PE/VC development in 2012 and beyond.

Eight of the 12 regional countries saw score changes this year in indicators related to both the broader operating environment and those pertaining directly to PE/VC. Most changes were positive, with only Argentina and El Salvador posting a downgrade in overall scores. The middle and bottom portions of the regional ranking saw slight changes, but the regional leaders maintained their positions. Chile ranks number one with a score of 75, followed by Brazil (72), Mexico (65) and Colombia (60).

This is the seventh consecutive year that Chile has led the regional ranking. The country continues to benefit from an overall environment of institutional and legal certainty, with strong scores for its judicial system and protection of intellectual property rights. But there is still regulatory complexity specific to private equity.

Brazil performs strongly in the majority of indicators, but remains in second place due to weak scores on perceived corruption and protection of intellectual property rights.

Among the top ranked countries, Mexico improved its score due to an upgrade on capital markets and feasibility of exits. Listing requirements for small and medium-sized companies (SMEs) to enter Mexican stock exchange were eased, and IPOs are being stimulated in part by added liquidity from the pension funds participation in the market.

Colombia maintains its fourth place position in the regional ranking. While the country’s scores did not change this year, positive trends in efforts to streamline regulation, improve the tax code and increase liquidity in capital markets have put the country on alert for possible upgrades in the future in key indicators.

Uruguay and Trinidad and Tobago are tied to round out the top five countries.

The 2012 Scorecard benchmarks Latin American and Caribbean countries by comparing them with four markets outside the region – UK, Israel, Spain and Taiwan.

The 2012 Scorecard was produced in collaboration with the Economic Intelligence Unit, with support from the Multilateral Investment Fund and the Andean Development Corporation. It ranks 12 countries based on the following indicators:

NEW ONLINE PLATFORM
LAVCA worked in collaboration with Latin American startup Junar to develop an online platform with information from the 2012 Scorecard. You can access the new online portal here.