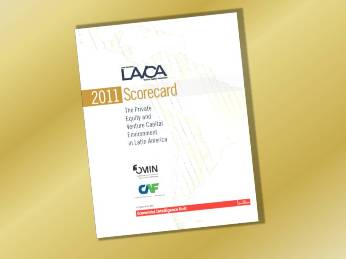 The 2011 edition of the Scorecard on the Private Equity and Venture Capital Environment in Latin America reflects a stable regulatory environment in which the top ranking countries maintain high scores, with Chile (75), Brazil (72) and Mexico (63) repeating in the top three positions. However, both Chile and Brazil saw slight decreases in their overall scores due to adjustments to perfect scores for laws on fund formation and restrictions on local institutional investors, respectively.

As overall macro environments improve and global investors expand their presence in major Latin American economies, there is an increasing awareness of the importance of private equity and venture capital in local markets. At the same time, fund managers have actively engaged regulators on industry-specific rules and regulations.

Chile continues to lead the regional rankings for the sixth year. The government is proactively promoting the development of an entrepreneurial community with ambitious programs launched by the new administration, and the impact of these programs will be monitored carefully.

While Brazil remains in second place behind Chile in terms of its overall environment for PE/VC, the country is setting the pace for the industry in the region, including proactive efforts to establish best practices and strengthen the regulatory environment.

Regulators in Mexico also showed increased awareness of the asset class, as they continue to modify the regulation established in 2009 allowing Mexican pension funds to invest in private equity through Development Capital Certificates (CKDs).

The consolidation of industry regulation has also been a priority in Colombia, which remains in fourth place in the region in this year’s Scorecard.

The 2011 Scorecard continues to benchmark the Latin American and Caribbean countries by comparing them with four markets outside of the region – UK, Israel, Spain and Taiwan. While the UK is known for its robust PE/VC industry, the others have emerged more recently as developed private capital markets. While none of the Latin American and Caribbean countries top the UK (93), Israel (81) or Spain (76) in this year’s Scorecard, Chile (75) and Brazil (72) remain above Taiwan (63) and Mexico (63) ties its score.

The 2011 LAVCA Scorecard was produced in collaboration with the Economic Intelligence Unit, with support from the Multilateral Investment Fund and the Andean Development Corporation. It ranks 12 countries based on the following indicators: