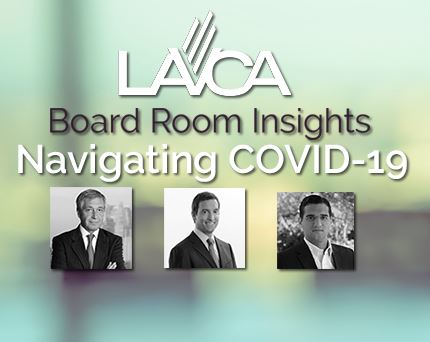 On Friday April 17, a LAVCA Member-only private discussion was held on navigating COVID-19. More than 100 Members participated and heard perspectives from LAVCA Chair and Co-Managing Partner of Victoria Capital, Carlos Garcia, LAVCA Chair Emeritus and Managing Partner of Advent International, Patrice Etlin, and former Board Member of LAVCA and Founder of Riverwood Capital, Francisco Alvarez-Demalde. This was an opportunity to get live insights and confidential information on the impact of COVID-19 on the private capital industry in Latin America.

Carlos Garcia is the Managing Partner and Chairman of Victoria Capital Partners, a regionally dedicated private equity firm, and the successor to DLJ South American Partners. Prior to forming DLJ South American Partners in 2006, Mr. Garcia joined Donaldson Lufkin & Jenrette (“DLJMB”) in New York in 1995 to focus on Private Equity Investing in South America. Prior to joining DLJMB, he spent six years at Bankers Trust Company in New York, where he ran the Latin American Merger & Acquisitions and Private Equity Group, and nine years at Bank Boston Argentina, where he was head of Corporate Finance and Investment Banking. Mr. Garcia serves on the board of directors of Corona Industrial, Satus Ager, Energy (Fitness Holdings SpA), Grupo Los Grobo and EMPEA. In addition, Mr. Garcia serves as Chairman of the Board of the Association for Private Capital Investment in Latin America, and was the Founder and Vice-President of the Argentine Private Equity and Venture Capital Association. Mr. Garcia graduated as a Certified Public Accountant from the Catholic University in Argentina in 1981.

Patrice Etlin joined Advent International in 1997 and started the firm’s investment activities in Brazil. He has 21 years of private equity experience and has worked on Advent’s investments in 13 companies, including Allied S.A., Terminal de Contêineres de Paranaguá (TCP), Kroton Educacional, Lojas Quero-Quero, IMC (including Viena and Grupo RA), Proservvi and Atmosfera. From 1994 to 1997, Mr. Etlin was a partner at International Venture Partners in São Paulo, where he was responsible for the overall operation of a media and communications fund focused on Brazil. Previously, he spent five years with Matra Marconi Space, initially as a systems engineer on a project to develop a European military observation satellite. Mr. Etlin received an undergraduate degree in electronic engineering from the University of São Paulo, a master’s in industrial engineering from École Centrale de Paris and an MBA from INSEAD. He is also Chair Emeritus of the Association for Private Capital Investment in Latin America.

Francisco Alvarez-Demalde is a Co-Founding Partner and Managing Partner of Riverwood Capital Partners, and heads Riverwood’s New York office and its Latin America efforts. Mr. Alvarez-Demalde has invested and been actively involved in the development, operations, and growth of several successful businesses across Latin America and North America. Prior to co-founding Riverwood, Mr. Alvarez-Demalde was an investment executive at Kohlberg Kravis Roberts & Co. (KKR) and Eton Park, where he focused on private equity investments in the Technology Industry and other sectors in North America, Latin America, and other emerging markets. Previously, he was with Goldman, Sachs & Co.