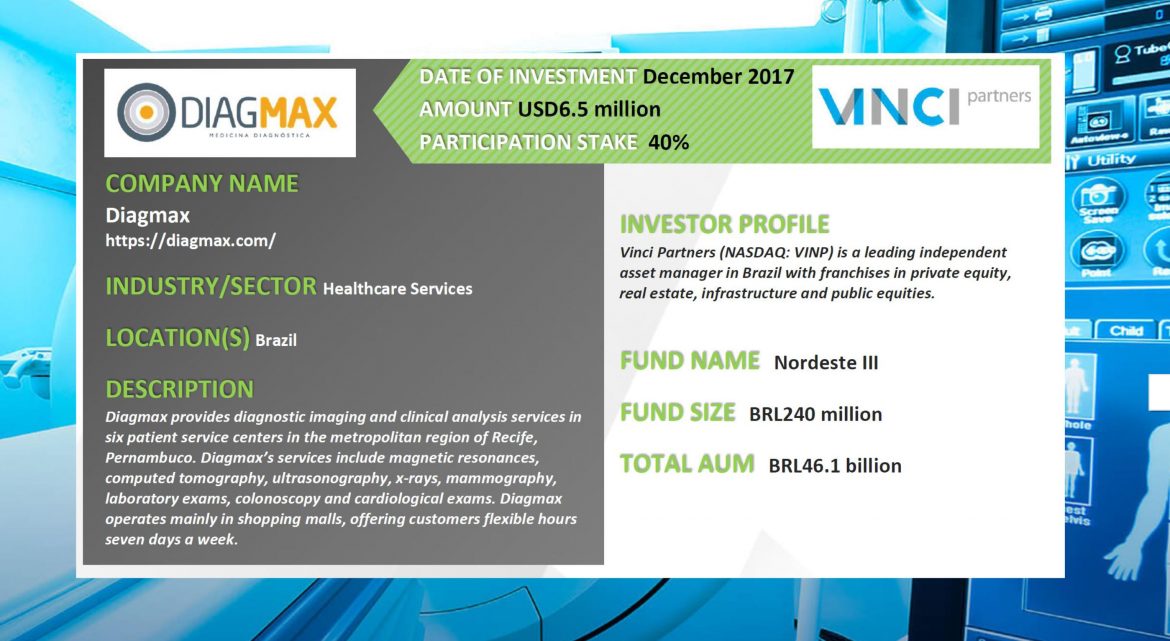 Low private healthcare penetration rates coupled with an increase in the number of private health insurance beneficiaries in Brazil’s Northeastern region has created attractive opportunities for private health providers to expand in the region. Only a year and a half after securing Vinci’s investment, medical diagnostics company Diagmax was sold to Fleury Group (BVMF: FLRY3) for BRL80.4m (USD19.4m), with an additional earn-out of up to BRL31.6m (USD7.6m). In reais, Vinci saw a 45% IRR for the equity portion and a 20% IRR for the debt portion of its investment. During the holding period, Diagmax’s EBITDA grew 195%.

Since 1988, Brazilians have had access to a public universal healthcare system called the Unified Health System (SUS – Sistema Único de Saúde), which decentralizes healthcare by distributing responsibility for most health services, delivery and spending to municipalities. According to Brazil’s Health Ministry, SUS serves over 190 million people, with nearly 80% relying exclusively on the public system, making it the largest open access government-run healthcare program in the world.

Despite Brazilians’ reliance on SUS, private sector spending on healthcare outpaces the public sector in Brazil. In 2018, private spending accounted for 58.2% of health expenditure in the country, compared to an average of 38.5% among members of the OECD. According to Brazil’s National Health Agency, the number of Brazilians in private health insurance plans increased from 44.9 million in 2010 to 47.6 million in 2020. Brazilians often choose to enroll in private healthcare plans directly or through their employer, as services offered by private providers are generally considered to be of better quality compared to those in the public system.

However, access to private healthcare is not equal across all Brazilian states. The poorer and less developed Northeastern region has lower private healthcare penetration rates than the Southern states, but the number of private beneficiaries has been increasing in recent years. In turn, these two factors create attractive opportunities for private providers to expand their presence in the Northeast.

Vinci Nordeste III (NE III) is a growth private equity fund that invests in the Northeastern region of Brazil, where SMEs have limited access to affordable and long-term capital compared to the rest of the country. The fund is part of Vinci’s Impact and Return strategy and targets SMEs in the healthcare, specialized retail, value-added services, education, and healthy nutrition sectors.

In 2017, Vinci met the founders of Diagmax, a medical diagnostics company based in Recife, Pernambuco. The company was relatively new to the medical diagnostics market but held a seven-year track record of revenue growth. Its primary competitive advantage relied on offering a one-stop solution for diagnostics services at accessible locations such as shopping malls. The company sought an external partner with affordable capital to expand its operations, acquire medical equipment and support the company’s long cash conversion cycle.

In December 2017, NE III invested USD6.5m in Diagmax through a combination of equity and debt, which allowed the founders to minimize dilution. At the time of investment, the company operated five locations and was one of the top three medical imaging companies in the state. Vinci provided capital to finance the expansion of units and acquisition of medical equipment, as well as the acquisition of a local oncology business, further expanding Diagmax’s service offering.

In addition, new centers were designed to be wheelchair-accessible, and employees were trained to care for children with Autism Spectrum Disorder. The company also took advantage of excess capacity to perform 6,170 exams for lower income clients affiliated with the public system. In addition, Diagmax expanded its permanent workforce by 12.8% and increased the number of employees affiliated with the company’s healthcare plan by 7.7%.

A year and a half after Vinci’s investment in Diagmax, Brazilian listed medical diagnostics group Fleury approached the company regarding a possible acquisition to expand their operations in the Northeast. In September 2019, Fleury signed a binding agreement totaling BRL80.4m. (USD19.4m) for the acquisition of 100% of shares in Diagmax, agreeing to pay an additional earn-out of up to BRL31.6m (USD7.6m) if specified milestones were achieved. The transaction closed in January 2020 after receiving approval by Brazil’s antitrust authority. After accounting for the additional earn-out, NE III saw a 45% IRR in BRL for the equity portion and a 20% IRR in BRL for the debt portion... download the full case study to read more.