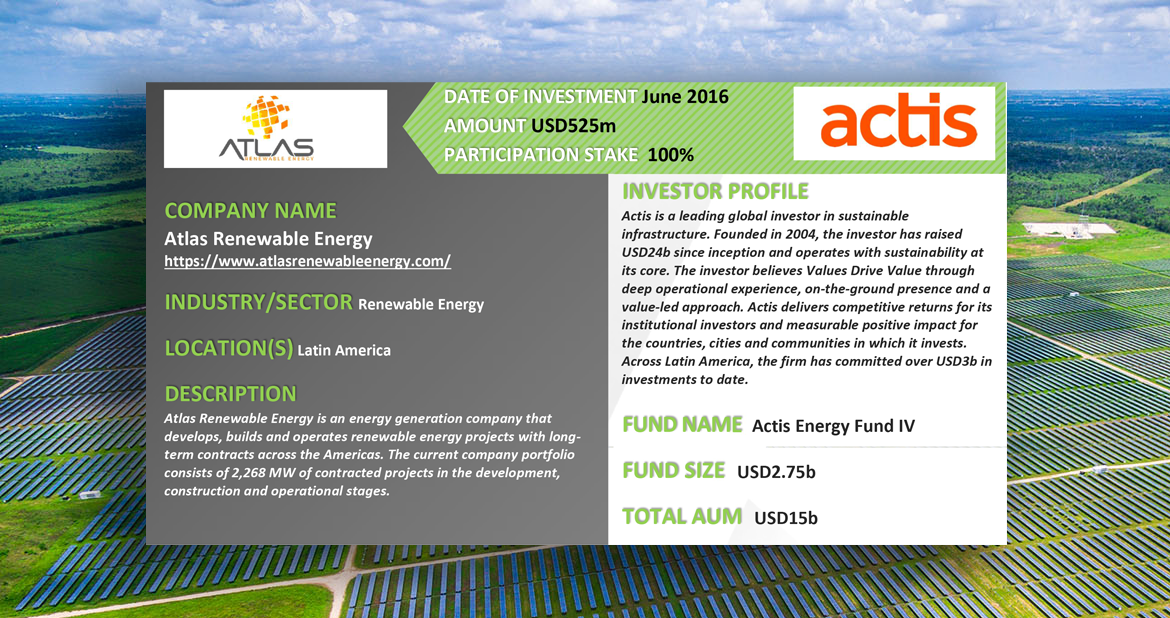 OPPORTUNITY
The Inter-American Development Bank estimates that electricity requirements in Latin America will increase more than 91% through 2040. Renewables play a key role in the region’s ongoing energy transformation, driven by a combination of government efforts and greater pressure from private companies to reduce emissions and meet the Paris Climate Accords. According to data from the International Energy Agency, the region’s solar and wind electricity generation grew an average of 47% per year between 2010 and 2018 — more than any other type of energy source.

EXECUTION
Following the successful acquisition of SunEdison’s assets in early 2017, Actis rolled the projects into a newly created platform called Atlas Renewable Energy. Actis committed USD525m to expand the platform into a leading power generation company in Latin America. Atlas’ value proposition consists of both partnering with local developers for new projects and developing its own proprietary pipeline with a focus on top-tier solar PV projects in Brazil, Mexico, Uruguay and Chile. In addition, Atlas partners with local communities to ensure project sustainability through initiatives that benefit residents in the long term.

ESG IN FOCUS
Atlas partners with local communities to create projects that address their specific needs and challenges. Initiatives focus on three pillars of sustainability: bolstering quality education, advocating for gender equality and enhancing sustainable living. Recent initiatives in Brazil include apiculture projects, donations of seedlings for plantations of native fruit trees and the creation of environmental education centers and plant nurseries. In Mexico, Atlas built digital classrooms in eight schools and a public library, and the company also implemented a conservation initiative to protect 1,229 hectares of forest and grassland. Atlas also aims to reduce gender inequalities and promote inclusion in a historically male-dominated industry. In 2020, the company established its Women in Workforce Program, “We Are All Part of the Same Energy,” to boost permanent technical skills among local women and improve access to employment and leadership positions in construction. The program is funded in collaboration with the IDB and has trained nearly 1,000 women from nearby communities for qualified positions in electricity, mechanics, health, safety and environmental management… download the full case study to read more.