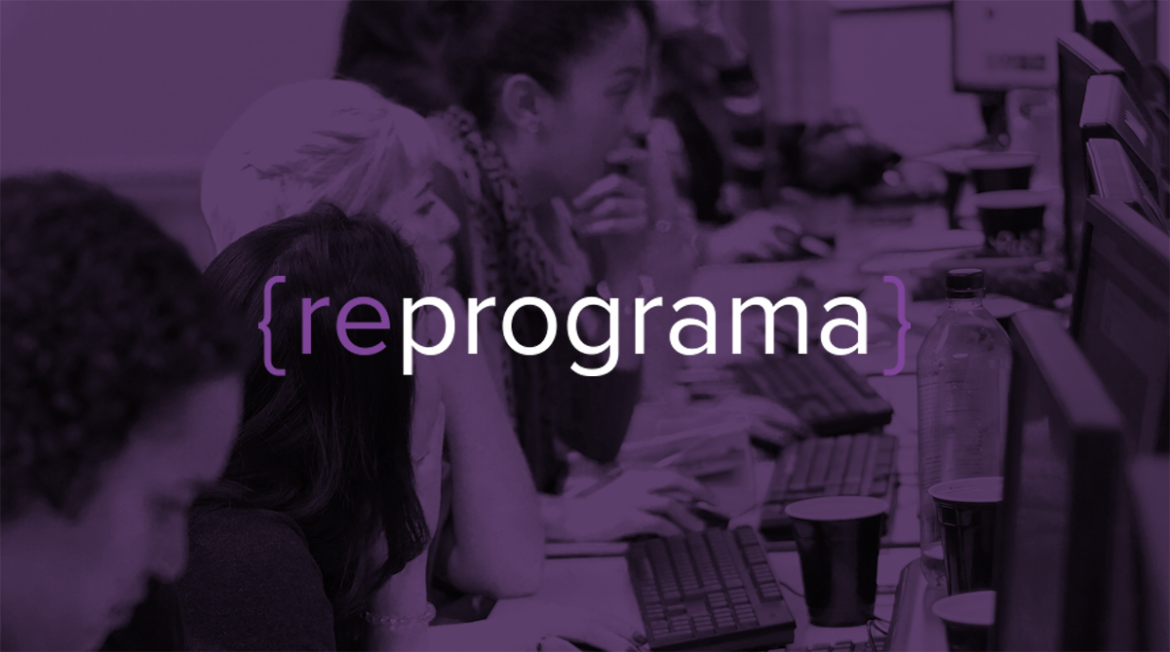 In this interview with founder & CEO Mariel Reyes, we learn about how she bootstrapped the organization and forged a partnership with Facebook on her mission to close the gender gap in Brazil’s technology sector.

LAVCA: When and why did you and your co-founders start {reprograma}, and what were you doing before?

Mariel Reyes: ​I started working towards structuring {reprograma} in September of 2015, meeting with several companies, engineers and getting a better understanding of the market failure—the lack of women programmers in Brazil. Our first pilot class with 23 students started in May of 2016, and a few months into the course I invited two of the volunteers, Carla de Bona and Fernanda Lemos de Faria, to become my co-founders.

Before that I had been at the International Finance Corporation (IFC) since 2007, based in Peru, the Philippines, and Brazil, doing project and portfolio management for the region, and providing technical assistance to our clients on environmental and social risk management.

LAVCA: How does the program work? How do you approach your students and the employers?

Mariel Reyes: ​The program consists of a full- time, 8-week unpaid bootcamp, focusing on unemployed women who have always had an interest in technology but have never had the opportunity or resources to learn how to code. As of January 2018, we will be expanding our course duration to 18 weeks.

We focus on three components: (i) front-end development, (ii) professional capacity building and development of entrepreneurial skills, and (iii)​ mentorship and technology company visits (Facebook, Nubank, Microsoft, etc.), so that our students can get a first-hand view of what it’s like to work in tech.

To date, our professors and monitors have been unpaid volunteers—freelancers or professionals working in startups who believe in our mission and want to help out. We are 32 volunteers supporting this program, although our model will change in 2018, thanks to a partnership with Facebook that will allow for us to hire paid, part-time professors.

We approach our students through social media, mainly Facebook, and as CEO, one of my main responsibilities is seeking partnerships with companies to support our initiative and to hire our graduates.

LAVCA: Why are you focused on women?

Mariel Reyes: ​There is a significant gender gap in Brazil’s technology sector (and the world). The top computer science universities in Brazil are graduating 5% or less women each year, and according to the Brazilian Ministry of Education, only 15% of students studying computer science are women.

They say the future is being written in lines of code, and by not having 50% of the population contribute to the development of technology, I think we are missing out on solutions that could be created to solve business, social, and environmental problems. By joining the technology sector, women can also contribute to developing solutions that address society’s problems as a whole.

…by not having 50% of the population contribute to the development of technology, I think we are missing out on solutions that could be created to solve business, social, and environmental problems.

LAVCA: How have you funded the business to date?

Mariel Reyes: When we first started {reprograma}, I carried out a crowdfunding campaign and used personal funds to help pay for operational costs and scholarships. More recently we have received small donations from tech companies’ staff and are partnering with Facebook for 2018-2019 operations.

Still, we are looking for more companies to join our mission and support our work, namely to cover staff costs and allow us to hire the best professors, as well as to support operational costs (legal, accounting, and communications costs).

LAVCA: Who is your typical student?

Mariel Reyes: Students are all unemployed women with no programming knowledge who cannot afford a coding course. Some have a professional degree (we’ve had musicians, designers, journalists, historians, nurses) and they are women who have always had an interest in technology but haven’t had the resources or support from families, or have found themselves in male-dominated classrooms where they felt that the environment was not conducive to learning.

Our students are on average in their twenties, although our only requirement is that they have finished high school, so we’ve seen students from 16 to 55 years old). They come from various Brazilian states, with some of our students having travelled to São Paulo to attend the course. These are women who are highly motivated to use technology to change their lives as well as the lives of their communities.

LAVCA: Can you share a positive experience you’ve had since founding {reprograma}?

Some success stories include Lidia Yoshino from our pilot class who was hired by GuiaBolso and is now a developer there.

Ana Paula Rocha from our second cohort, who developed the project “Na Verdade” during the course, a page that summarizes a series of facts regarding women in technology that respond to generalizations stating that women do not belong in technology, was featured in the blog Mulheres na Computação. Upon graduating from {reprograma}, she was hired by Mastertech and is now a full-stack developer.

Rosiane Gurjao from our third cohort is now a front-end developer at Carambola Tech and Mariana Ruther from our fourth class is a  junior developer at a tech company in Campinas.

LAVCA: What are your biggest challenges right now?

Mariel Reyes: The biggest challenge so far is job placement of our graduates. Many tech companies keep saying there are few to no women in their candidate pipeline.

Two realities exist here: Several top tech companies look for candidates graduating from the top computer science universities where less than 5% of graduates are women​; ​and the language in job descriptions tends to be male-centered (procura-se desenvolvedor, programador) which tends to shy away female candidates.

A second challenge for us is to ensure that we continuously improve our graduates’ programming levels such that they meet the standards expected by hiring companies. Even though the companies that have hired our graduates ​have seen their potential, ​and have been willing to invest in them to continue to grow, we are aware that more learning is needed to be able to graduate our students at a more competitive level.

LAVCA: What organizations have supported {reprograma} so far? How have they helped?

Mariel Reyes: We’ve had companies supporting with mentorship and visits including Nubank, Twitter, IBM, Microsoft, Thoughtworks, among others. We have also had companies offer scholarships for our students to continue studying such as Caelum, Tera, and Mastertech.

More recently we’ve had companies such as Facebook who believe in supporting the growth of our program and have invested through financial contributions. This will allow us to expand the duration of the program to 4½ months and ​have paid part-time professors.

LAVCA: Any stats you can share on traction so far?

Mariel Reyes: Our classes have had a 97% completion rate (students that left did so because they found a job).​

63% job placement rate of our graduates, in spite of the fact that efforts with companies to hire our students are just starting.

LAVCA: Any stats you can share on the gender disparity in startup, engineering, etc. in Brazil? How does the problem compare to the US or other markets?

A hopeful sign: Computer science has for the first time become the most popular major for female students at Stanford University.

LAVCA: Do you look at any coding programs in other markets for inspiration or collaboration?

​Mariel Reyes: I initially looked at Laboratoria – that started in Peru – for inspiration and collaboration, as well as other initiatives in the US including Girls Who Code, Black Girls Code, She++ and others. However, the profile of our student and our focus differs given we are a training program that places unemployed women in Brazil’s tech market.

This article is not available in Spanish. Please see English and Portuguese versions.