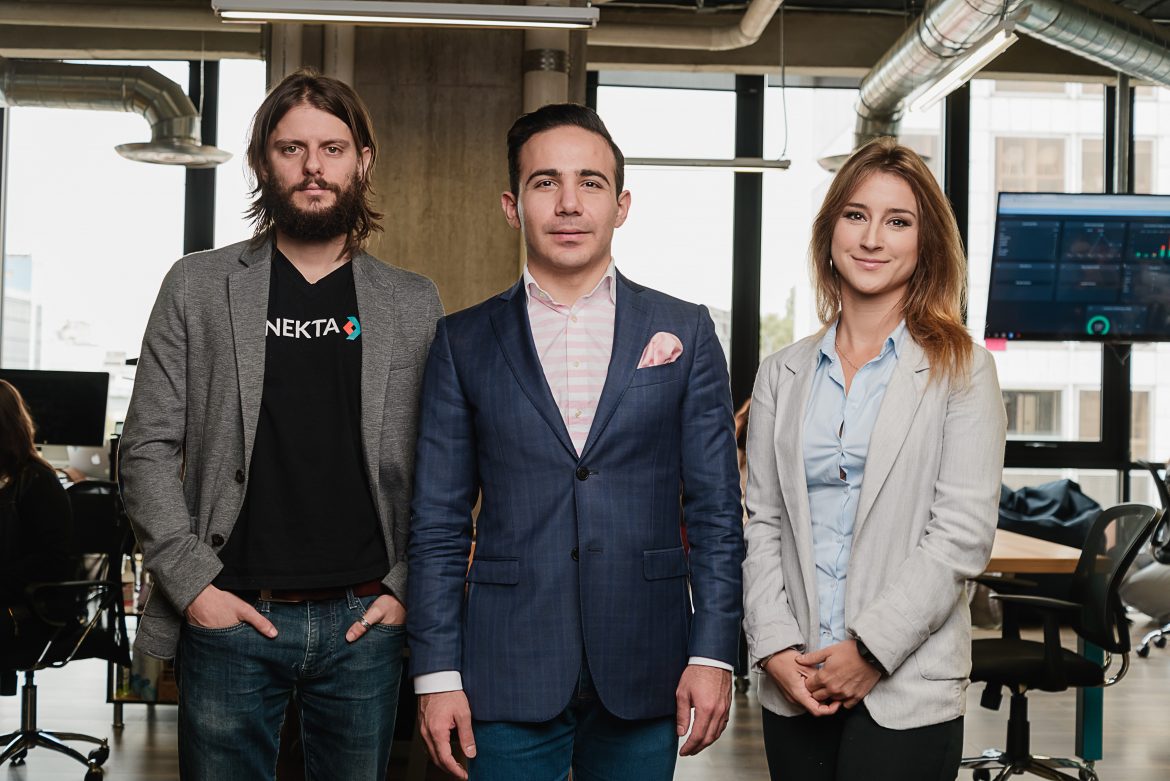 In this interview with Conekta co-founder and CEO Hector Cardenas, we learn:

LAVCA: Hector, you’re from Mexico, but you went to the University of Waterloo in Canada for your undergrad degree, as did Conekta’s other co-founders Cristina Randall and Leo Fischer. How did Conekta come together in 2011?

Cardenas: I met Cristina back in 2010 when she returned to our Alma Mater, the University of Waterloo, from an exchange program in Monterrey, Mexico. At the time, we were both living in a residence for entrepreneurs where we were introduced by the building supervisor. Cinekta’s other co-founder, Leo Fischer, was Cristina’s partner for their final project as system design engineers.

We connected over Mexico and the opportunities that come with doing business in an emerging market, versus going to Silicon Valley which was already saturated with so many amazing startups. Of course, it was going to mean that we had to do everything from scratch.

We connected over Mexico and the opportunities that come with doing business in an emerging market, versus going to Silicon Valley which was already saturated with so many amazing startups. Of course, it was going to mean that we had to do everything from scratch.

LAVCA: You started off with a kind of “Yelp for Mexico” model. How did you get from there to processing online payments for massive corporations?

Cardenas: We started as a business directory – a list of 2 million companies. When you graduate as an engineer, you think you know what the market wants. We said, “Mexico needs information. Consumers need to understand, they need to know what businesses exist, and this will help the economy.”

Everybody wanted to use it, but we couldn’t monetize it. We tried to allow consumers to write reviews, like Yelp.  You could see great essays on Yelp from in the States, but in Mexico the reviews were simple and didn’t provide enough information (“Oh, the food is great.”) Then we tried to sell premium advertising to those businesses—restaurants, bars, and night clubs, but they didn’t even have a website so it wasn’t the right fit.

At the time (in 2011), we were going to have our demo day at 500 Startups in San Francisco with the mentality that American investors would give us money because we have a great website and 3,000 visits a day. But when we arrived, the feedback from investors was: “What are you doing? Why are you not selling something? Why don’t you go B2B? The market is not ready. You need B2B, you need to monetize.” That changed our mentality.

Our next idea was to build an ecommerce solution like Shopify. We went to Estafeta, the biggest national shipping company in Mexico and convinced them to give us access to their web service. Our company created an online platform solution for businesses which automatically calculated the shipping costs, based on product weights. The label was auto-printed and the shipping provider would show up at your business to collect the shipment. It was the first time that that happened in Mexico and it allowed us to have experience integrating online payments, via Paypal and another solution called DineroMail. That was purchased by PayU.

With an API, developers and big companies were able to use the product. At the same time, it gave the big companies an opportunity to create their own branding on the front-end.

With e-commerce top of mind, it became obvious that the issues that needed to be fixed in Mexico were shipping and payments, so we took on the payments problem. We processed our first payment in February 2013 and also decided to build an API. If you just sell a final implementation, you only get SMBs. With an API, developers and big companies were able to use the product. At the same time, it gave the big companies an opportunity to create their own branding on the front-end. That started going really well, so we launched credit, debit, and cash payments.

LAVCA: So Conekta is basically giving businesses the ability to accept credit, debit, and cash payments through their online storefront?

Cardenas: It sounds really simple, because in the States you have companies like Stripe and Braintree doing this kind of stuff. But it’s not just about “tropicalizing” a product in the US. We needed to start with what’s needed in Mexico.

And in Mexico, it’s a mess. Being able to process a credit card without 3D-secure took us a long time, because banks didn’t want to create a process for an online payment without it. 3D-secure means you have to type in your bank password and actually put in your bank credentials to make a credit card. It creates a 70% drop out rate, because people don’t know their credentials. Imagine that Mexico is like the Wild West, less government intervention and regulation. If you commit online fraud, it’s not a crime in Mexico.

LAVCA: Is this part of the reason Mexican banks don’t want to accept debit cards for online purchases?

Cardenas: Exactly. The banks are afraid of fraud, because they don’t have really good technology and solid risk modeling in order to avoid or fight it. At the same time, they’re hesitant to collaborate with other entities in order to fix it. To be fair, there are ongoing joint efforts, but the fact remains that Mexico is one of the most fraudulent countries in the world for online payments.

Another thing that is important to understand about payments in Mexico is that 61% of the adult population in Mexico is unbanked. In the US it’s about 7%. Then, from that 39% of adults that are banked, only 18% of adults have a credit card. It’s actually really hard to get a credit card in Mexico because the banks don’t want to share information to produce a credit score, even among themselves.

LAVCA: Sounds like a massive opportunity. How has Conekta made headway on a problem that the banks haven’t?

Once we started processing payments, we looked into the credit card system. It was obvious to us that it was poorly structured and executed. The very information a criminal needs to commit fraud is provided on anyone’s credit card. We didn’t understand why the infrastructure was built that way.

We’re realizing more and more that a fintech company in an emerging market can do what banks were supposed to do.

We’re realizing more and more that a fintech company in an emerging market can do what banks were supposed to do. What I think is going to happen is that the banks are going to be the back-end, perhaps not even having communication with consumers, and then fintech companies like ours will connect the front end, enabling us to build products that consumers want.

In Mexico, the 61% of the population which is unbanked is not because they don’t want to. It’s because the banks haven’t offered good enough products and incentives. In order to open a bank account, consumers have to physically go to a branch and stay there for two hours. If you have an issue with your password, same thing – you need to go to the branch in order to get your password reset.

Interestingly, fintech innovation is pushing changes on the country and on Mexico’s regulation. It’s been awesome.

LAVCA: Conekta is not specifically addressing the question of getting individual consumers banked, right? You’re helping businesses be able to process digital payments.

Cardenas: Yes, but at the same time, we’re helping consumers indirectly, because we’re allowing them to pay using cash, through OXXO, the leading convenience store chain in Mexico. The majority of the population that do not have a bank account or a debit card don’t have any means to pay for online transactions.

Guess is one of our customers, for example. So if you want to purchase an item, you can pay with credit card, debit, and OXXO. If you choose OXXO, you print out a barcode, take that piece of paper to the OXXO and then they scan the barcode and tell you the exact amount you need to pay. At that moment we send a payment notification to Guess, and they send an email confirmation to the consumer. It’s very similar to the boleto bancario in Brazil. It’s helping the unbanked to be able to be included in ecommerce.

LAVCA: How did FEMSA come into the Series A and does that come with any kind of strategic benefits for Conekta?

Cardenas: FEMSA approached us when we started to raise our Series A and wanted to be part of the investment. FEMSA doesn’t have a venture fund, so we dealt with their M&A department. In the end, we were able to secure a VC type investment from FEMSA, together with Jaguar Ventures, VARIV Capital, and Conconi Growth Partners.

Working with FEMSA is completely strategic. OXXO is one of the largest convenience store chains in the world, with about 14,500 locations, and they open about 1,500 stores per year. Just to put that in perspective, 7-Eleven has about 8,000 stores in Canada, the US, and Mexico.

LAVCA: Do you have anything you want to share about working with your seed investors?

Cardenas: Yeah, especially with Rafael del Haro and Diego Vargas from VARIV, and Eric Perez-Grovas from Jaguar. They knew the local market and helped me to bring Conekta into the reality of an emerging market. For instance, Eric, who was Mexico’s country manager for MercadoLibre, helped us figure out what we needed to focus on and introduced performance metrics. An American investor cannot understand the difficulties of being in a country like Mexico, or how to sell to Mexican companies, because it’s completely different from an enterprise selling in the States.