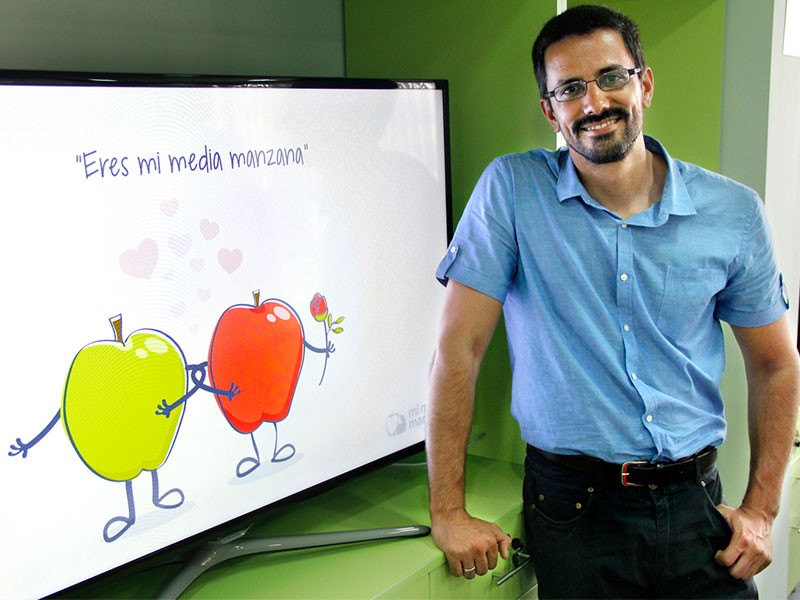 LAVCA heard from Pedro Neira, CEO & Founder of Peru-based startup Dating LATAM about his experience as an entrepreneur and how his track record has helped to raise local and international capital.

LAVCA: Please summarize your business. Where is Dating LATAM headquartered? When and how did the company get started?

Neira: Dating Latam aims to bring Online Dating to the still nascent Spanish speaking Latin American Market. Dating Latam’s first product “Mi Media Manzana”, is the first matchmaking platform (Web + Mobile APP) based on a localized proprietary algorithm for Latin America. We have a freemium model where we monetize through paid subscriptions that go from US$ 5 to US$ 20 per month. Our big bet is that any middle class single over 30 years old in any Latin American country, has enough purchasing power to buy a US$ 8 subscription (which is roughly what a movie ticket costs). We’re currently present in Mexico, Colombia, Peru and Chile, with localized content, websites, algorithms and customer support, all from our headquarters in Lima-Peru. The market opportunity that we see is just too big to be ignored. In the US, there are over 80 million single adults that last year generated over US$2.2 billion in revenues for the online dating industry. China’s Online Dating market last year was 1.6BN but in Latin America, despite having a +600 million population, single adults are not yet using the Internet to find potential partners. Category penetration in this region is very low, less than 15% but all market trends indicate that this will dramatically change within the next 3-5 years, just as it has happened before in North America, Europe and Asia.

LAVCA: What barriers or obstacles did you overcome in the early stages of your company’s growth? What challenges, either terms of policy or the development of the market in Peru, does Dating LatAm face currently?

Neira: Raising capital from a country that has limited capital market (no VC’s, no Business Angels, no crowdsourcing, almost no previous startup exits, no government support, etc.) is a very tough challenge, but we managed to raise over US$ 1M on our seed round. Our individual experience raising over 10 rounds in three previous startups surely helped a lot. On the other hand, monetization is also very difficult. In the US or Europe, 100% of subscription sales are paid with recurrent billing on a credit card. In Spanish speaking LATAM, with less than a 20% credit card penetration rate you have to come up with creative ways to charge users, offline payment methods, telemarketing, payments in advance, bank transfers, micropayments, etc.

LAVCA: What is your background? How did your experience with AdondeVivir contribute to the launch of Dating LATAM?

Neira: I studied Business Administration at the Universidad del Pacífico in Lima, Perú. Later on, I went to IESE Business School in Barcelona where I studied in the full time English MBA program. Since the completion of my MBA (9 years ago) I became a full time Internet Startup Manager and serial entrepreneur. I’ve been reading, studying and learning every aspect of entrepreneurship as well as “Lean Start-up” methodologies every day since I started my first company back in 2006 in Barcelona. My second company didn’t work and we pulled the plug after 6 months. My third venture was the most successful so far. It’s a real estate classifieds company called www.adondevivir.com. We became market leaders very quickly and after 2 years since launch, the company was acquired by NAVENT (the leading classifieds company in LATAM with over US$ 100M yearly revenues). I stayed with the company as CEO for two more years after the acquisition, and learned how to scale up the company from one of the best teams of Internet Managers in the region. I learned a lot from Nicolas Tejerina (NAVENT’s CEO) and Emilio Gomizejl (CFO). In July 2013 I decided to step down from AdondeVivir’s to start my biggest and most ambitious venture so far: Mi Media Manzana.

LAVCA: What did you want to do differently or the same with this company based on your previous experience as an entrepreneur?

Neira: The most important thing I learned from my previous experience managing Internet Startups in LATAM is to aim for a much bigger market than your local market. Latin America has a bigger population than Europe, but much more homogeneous (same religion, same language, similar weather, similar culture, etc) so any technology that works in a couple of countries, will probably work in the rest with a small degree of localization. The other very important thing I learned was to create a very strong Board of Directors early on to help us make better decisions. I focused on that since the start of Mi Media Manzana and today I can confidently say we have an amazing board. We have the CEO of the leading Digital Advertising Agency in the Andean Region (Phantasia Wunderman), an ex VC/Investment Banker (DFJ / Morgan Stanley), the ex VP of Marketing of eHarmony, the head of one of the most important local Family Offices and the CEO of the leading local eCommerce retailer.

LAVCA: What is the talent pool like in Peru for a technology startup? Are there certain roles that are harder to hire for than others? Why? Overall, what are the biggest advantages to building a company in Peru?

Neira: At a small scale, there is enough talent but I think when companies start to get bigger and need specific technical skills, then there is a shortage of talent in Peru. Again, I see my market as LATAM, not Peru and the same vision goes for our talent acquisition. In the near future we might hire the best Colombian IOS Developer or an Argentinian CFO. We need to acquire International level talent in order to build a world class company.

Neira: The biggest advantage of building a company in Peru? Definitely costs. Marketing costs and personnel costs are much lower here than in the US or even Mexico or Argentina, so funds tend to last longer.

LAVCA: Have you received any financing to start/grow Dating LATAM? How did you meet and ultimately decide to partner with your investors?

Neira: I’ve raised two small seed rounds of US$ 650K each. The first round was raised entirely from local investors. Our first investors were the owners of Phantasia Wunderman. After that, a couple of Angel investors and a local family office. The real major breakthrough in our first seed round was the investment of Ottokar Rosenberger, former VP of Marketing of International Markets of eHarmony. He saw the huge market opportunity, liked the team and decided to invest. Having the endorsement and industry insight of Ottokar gave us a lot of credibility. Ottokar became a Board Member and a key advisor in our company since then.

The second round was completely different. We had a follow on investment of all the investors in the previous round and for the first time we received funds from two Seed Funds from the US: A non public seed-fund from New York and Sparklabs Global Ventures. That was also a major endorsement for us, we were Sparklabs first ever investment in Latin America.

LAVCA: Did the experience selling your previous online company to investors help with getting funding for this endeavor?

Neira: Definitely. Very few people in LATAM have had the experience of going through the whole loop of: having a business idea with a big market opportunity, developing a business plan, fundraising, getting cofounders on board, assembling a solid team, launching an MVP, escalating the product, competing against much bigger companies, fundraising again, becoming market leaders, and exit. This experience is extremely valued by investors and definitely helped us to get funded, specifically because my other two cofounders (CTO and COO) also worked with me on AdondeVivir. Other factors that helped were the fact that we were selected as the first ever Peruvian startup to be accepted to an acceleration program in Silicon Valley, BlackBox Connect (July 2014) and more recently (August 2015), we became an ENDEAVOR company.

LAVCA: Do you have plans to raise additional capital? How much and for what? Please describe your ideal partner.

Neira: Yes. After completing our transition to mobile with fully functional IOS and Android APPS, as well as increasing our presence in our most important markets (Mexico and Colombia) we’ll start raising our Series A round in the first half of 2016. Our vision is to aim for 50-60% market share in the four countries where we operate in less than 2 years (right now with less than 12 months online in three countries, we have an average market share of 15%-20%). To achieve that kind of growth we need a strong lead investor that believes in our long term vision.

Neira: For our international expansion we’re looking for investors either with strong local connections and knowledge of any of our main target markets (Mexico, Chile or Colombia) or hands off funds that believe in the market opportunity.

LAVCA: Do you have advice for entrepreneurs in Peru looking for capital to start or scale their companies?

Neira: Stop going to business competitions and raise “real” capital. It might be OK to do it at a very early stage, maybe go to one or two but I’m seeing more and more Peruvian entrepreneurs that never raise money from real investors, and just jump from one startup contest to the next. The problem is that the money you receive from that source, generally has close to “zero accountability”. If things go wrong, you don’t have to step in front of an investor and tell them that you didn’t achieve your quarterly milestones. Raising “real” money has that advantage, the added pressure that you need to go forward faster and also the benefit of not losing razor focus on your business. On the other hand, there’s more seed capital and liquidity from “high networth” individuals in Peru now than ever before in our history, so it’s a great time to raise those early rounds locally.

LAVCA: Where do you see your company in five years? Any plans to expand internationally? What markets would be most attractive and why?

Neira: There are three main strategic goals we will achieve within the next five years to win the online dating market in Latin America: 1)market share, 2)mobile and 3)monetization. In 5 years we should be market leaders with over 50% – 60% market share in Mexico, Colombia, Chile and Peru and present in 10 other countries in Latin America. 80% of our traffic and revenues will come from mobile, and we will have completed the monetization learning curve in Latin America, something multinational global players used to recurrent charges on credit cards, haven’t been able to do so far. With over 500,000 registered users, an average traffic market share of 20% in the four countries where we’re present and more than 45% of our traffic coming from mobile, I’m glad to see that after 18 months since we first went online with “Mi Media Manzana” we’re well on our way to that goal.